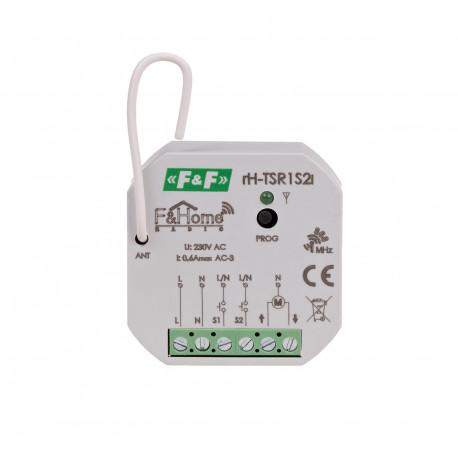 Roller blind relay with two inputs of the F&Home RADIO system.
The rH-TSR1S2 module is a combination of a three-state relay and two contact inputs. The module sends information about closing or opening of the contacts to the system and controls the relay, which might activate bi-directional electrical receivers. Communication with the server is done via radio. The module has two physical inputs for connecting two momentary potential-free buttons, and two relay outputs. The relay is designed to work with resistive, inductive or capacitive load of the contacts, both in DC and AC circuits. The rH-TSR1S2 is particularly suitable for controlling roller blinds (change of motor operation direction) and other devices where you cannot simultaneously activate two circuits.
AUTONOMOUS MODE:
If the module is disconnected from the server, it goes into autonomous mode. Holding down the button connected to contact 1 or 2 switches respectively the first (up) or the second (down) output, and releasing the button turns them off.
Conditions for autonomous mode to activate:
1. Correct connection of S1 and S2 contact with the button
2. Option Offline: autonomous mode is enabled in the Installer settings.

30 other products in the same category: